Required Resources
Read/review the following resources for this activity:

Initial Post Instructions
This week you will read about architecture. The lesson includes information on Roman architecture, which was greatly influenced by the Greeks and Etruscans.

Locate at least two architectural works that were influenced by Greco-Roman architecture. These can be from any time period after the Greco-Roman period but should be from different periods themselves (e.g., one from Renaissance and one from Baroque). Then address the following:

Use examples from the text, the lesson, and the library to help support your answer. Please remember to provide images and citations to help illustrate your points. 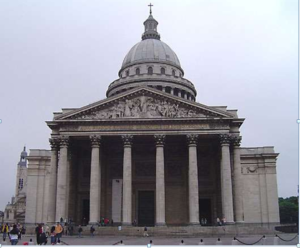 I selected the Pantheon in Paris and the New York Stock Exchange Building. The former was built in the late 1750s and inspired by the Roman Pantheon. Originally, when architect Jacques-Germain Soufflot created it, it was designed as a church (Tikkanen, 2020). Its function later changed during the French Revolution when it became secularized in honor of the Frenchmen. In the 19th Century, the building was again reconsecrated and re-secularized (Tikkanen, 2020). Today, it serves as a civic building. It has influences from both the Greeks and Romans. These can be seen in the dome-shaped roof, use of Corinthian columns to create a porch, symmetry of the building, triangular pediment, and sculptures on the pediment.

The New York Stock Exchange building was originally opened for business in 1903. As the name suggests, it is used for the stock exchange, hosting the world’s largest stock exchange market.  It is one of the classical architectures in the United States. As seen in the attached…………………Please click the icon below to purchase full answer at only $5

© 2019 gradedtutorial.com
All rights reserved. We provides online custom written papers, such as term papers, research papers, thesis papers, essays, dissertations and other custom writing services inclusive of research material, for assistance purposes only.
These custom papers should be used with proper reference.

error: Content is protected !!
× How can I help you?