You are required to submit the FINAL copy of this assignment, but you may first submit an optional DRAFT. This will allow you to receive qualitative feedback that can inform your revision. You should always avoid focusing solely on the grader’s DRAFT feedback; use the feedback as a supplement to the course lessons and your own revision ideas. Always expect the revise beyond what the DRAFT grader specifically notes.

You have two options for this assignment:

Option #1: Analysis of an Individual Comic Strip or Political Cartoon

And importantly, which of the key terms from the topic lesson can you discuss in your analysis? For example, how of elements of imagery, symbolism, metaphor, and/or irony help reveal the cartoon’s message?

As with all academic essays you write in this course, this essay should have a well-defined introduction with a thesis statement, body, and conclusion.

1A successful analysis will go beyond the obvious, literal elements of the cartoon and will analyze figurative elements, too. Use the course topic lessons to inform your analysis.

Be sure to document the cartoon or comic strip on a Works Cited page. Please visit the following source for citing an electronic image: https://owl.english.purdue.edu/owl/resource/747/08/

The guidelines for this assignment are as follows:

Length: The assignment should be at least 500 words.

Header: Include a header in the upper left-hand corner of your writing assignment with the following information:

Underline your thesis statement in the introductory paragraph. 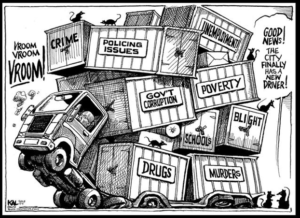 In this paper, I will analyze one of Kevin “KAL” Kallaugher’s cartoons on Baltimore Sun. the cartoon illustrates Jack Young coming to power as the new mayor in Baltimore. Baltimore has had three mayors in the past decade. Among these, two have resigned owing to scandals, both involving criminal investigations. The outgoing mayor, Catherine Pugh, resigned following a scandal over a self-published children’s book (Braidwater). Her predecessor declined to seek another term after riots broke out due to the increasing murder rate and police misconduct. In 2019, Pugh stepped down, and Jack Young took over as the new mayor. The cartoon illustrates the state of the city as Young takes over. Herein, the artist uses symbolism, imagery, and irony to capture the political, social, and economic issues present in Baltimore.

First, the author widely uses symbolism in the illustration. First, there is the truck, which is used to symbolize the city of Baltimore. The tractor unit and two front wheels are in the air. On the other hand, the semi-trailer section is overladen with numerous containers. These are labeled murders, drugs, schools, blight, government corruption, poverty, policing issues, crime, and unemployment (Kallaugher). Jack Mayor is sitting in the driver’s seat. The semi-trailer is…Please click the icon below to purchase full answer at only $10

© 2019 gradedtutorial.com
All rights reserved. We provides online custom written papers, such as term papers, research papers, thesis papers, essays, dissertations and other custom writing services inclusive of research material, for assistance purposes only.
These custom papers should be used with proper reference.

error: Content is protected !!
× How can I help you?